A Tribute to Martha Heck Ulman by Kate Trambitskaya, CEO 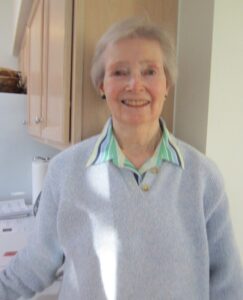 A Tribute to Martha Heck Ulman

I met Martha Ulman a few years ago when I became the Interim CEO for Spence-Chapin. During our very first conversation, she insisted that I call her Marty. I was nervous and excited to speak to the granddaughter of our co-founder, Clara B. Spence, but Martha’s demeanor and affect were kind, receptive, and welcoming.  Over the years, Martha and I spent many hours speaking on the phone, exchanging emails, and visiting in person where she lived in a retirement community on Long Island. Her soft voice always beamed with pride when she shared stories and anecdotes about her grandmother. I was honored and excited to learn about Ms. Spence, and Martha rejoiced in the endless accomplishments of her grandmother, ranging from being part of the Suffrage Movement, to rescuing the first “orphans” from Aquitania, and rejecting the notion of “illegitimacy” in reference to abandoned children. Clara B. Spence was a pioneer in adoption and a progressive educator of young women in the early twentieth century. Martha wanted the world to know about her grandmother’s legacy.

In 2020, Martha joined the Spence-Chapin Honorary Board of Directors and was honored at the 2019 Welcome Home Gala. The same year, Martha was interviewed for a Spence-Chapin film on the evolution and history of the organization, where she shared many highlights from the book she was writing about Clara B. Spence. Martha’s book, A Power for Good: Clara B. Spence, was released on October 18, 2022, with Martha scheduled to offer introductory remarks to the Board of Spence-Chapin at the annual meeting on October 19, 2022. Martha passed away on October 20, 2022, at the age of 85.  She made sure her book was delivered in time for the Board meeting and published accordingly. It was her life’s work and her proudest moment to be able to share her grandmother’s biography.

Martha was born in Manhattan and graduated Wheaton College in Massachusetts in 1959, later receiving her MA Summa Cum Laude in history from Long Island University. She authored an article on early adoption with the New York State Historical Association. Her interest in children led her to initiate an annual grant for an extracurricular program for pre-kindergarteners at a local school on Long Island. Throughout the years, she was deeply involved with Spence-Chapin Services to Families and Children and The Spence School as a supporter, historian, and advisor.  Her dedication to the children, families, and the two institutions built by her grandmother was immeasurable.

Martha was predeceased by her husband, Stephen Ulman, who passed away in 2021. She is survived by her son Stephen, daughter Cornelia, and four grandchildren. Martha’s long-standing wish was for the world to know and remember her grandmother, Clara B. Spence.

Martha desired for all the proceeds from the sale of the book, A Power for Good: Clara B. Spence, be donated to Spence-Chapin. She shared that she “wanted to continue to build on what Ms. Spence started a century ago.”

Learning about Clara B. Spence through Martha was the greatest gift for me and for Spence-Chapin. Knowing her as a mentor, a historian, an Honorary member of the Board, and a beloved friend was the greatest honor.