My Family’s Birthland Trip to Ethiopia 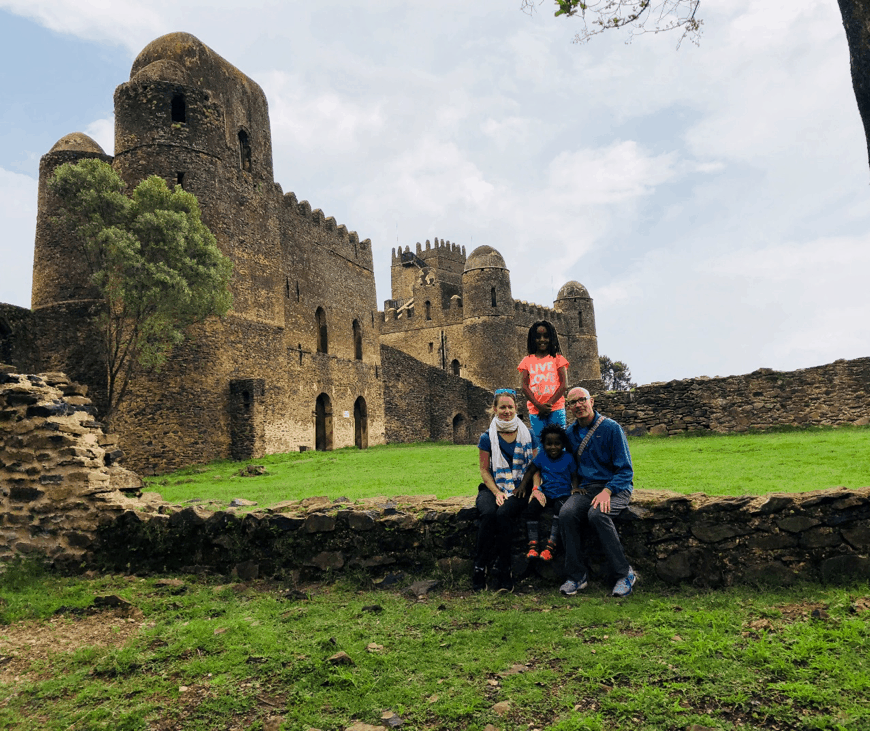 This summer, Mary and Chris took their family on a birthland trip to Ethiopia. Their younger daughter, Etta, 5, was adopted through Spence-Chapin from South Africa, and their older daughter, Arri, 8, was adopted through a different adoption organization from Ethiopia. We caught up with Mary to ask her about the trip, how she and her family prepared for it, and what advice they have for other families considering a birthland trip.

Why did you decide to take your daughter on a birthland trip?

The pivotal moment of deciding to do a birthland trip came in the most unexpected way—while watching the movie Lion. That movie really reinforced to us that our children need to know who they are and where they came from. We talked after the movie and decided, we have to go back and let our daughter see where she came from.

In what ways did you prepare Arri for the trip?

Our family is very fortunate to have an Ethiopian Church in our community that offers monthly classes to children from Ethiopia, many of whom are adopted. We also attend a Family Camp in Virginia for first-generation Ethiopian American children. So, by the time we made the trip, Arri already had learned a lot about the culture, language, and history of Ethiopia—even enough so that on the trip, she was able to say hello, and speak words in Amharic, Ethiopia’s official language, to other Ethiopians.

How did you and your husband prepare?

That’s a great question. As parents, we felt so vulnerable and…scared, would be an honest way of describing it. You realize you’re not really in control. We knew that we didn’t have to do this visit, we didn’t have to open this door—it could stay closed. But we felt like there could be healing if we all felt brave enough to walk through the door.

We found it helped to think about and work through the what ifs—and for us there were a million and one what ifs that came up for us. What if my child is upset by the experience? What if it isn’t a good experience? We went through them all.

But, in the end, it comes down to being brave and acknowledging that it’s scary to open a door that you could keep closed. But it’s worth it—the peace it gives to the child, to the birth family, to the parents. It’s indescribable.

What resources did you use for the practical preparations?

We sought out both the broad and the specific resources out there. For example, an Ethiopian Homeland Travel online group discussed both practical questions about the travel (such as immunizations to get), as well as emotional questions. We also talked to other families about their experience. Before our trip we got together with another family that lives near us who also adopted their child from Ethiopia and had recently traveled there together.

You were also able to set up a meeting with Arri’s birth mother?

Yes. We had reestablished contact with Arri’s birth mother when she was about two years old and have been writing back and forth and having phone conversations since, so we were able to set up a meeting with her in Ethiopia. Of course, up until the moment that it happened, we made sure to prepare Arri—and ourselves—for the very real possibility that it wouldn’t happen, as a result of logistics or something else. We didn’t want to promise Arri anything that we could not control the outcome of.

Her birthmother seemed very interested in what we are like as a family—what we like to do together, what we enjoy—to see how we are as parents, and to just spend time with us. She made it a point to let my husband and I know how grateful she was that we were raising Arri the way that we were. Arri was anxious at first, but once she was more comfortable, she seemed to just want to watch her birth mother—to get a sense of her. Overall, it felt good to have the affirmation that everyone is on the same page—it was affirming of everyone’s role in Arri’s life.

Would you still recommend the trip to parents even if a birth parent meeting isn’t possible?

Yes, definitely. It’s still such a rich experience for the child and the family to just be in the culture, to hear the language, to eat the food, to visit the historical sites. We brought Arri back to the hospital where she born, and I believe it’s important, even if the birth family visit isn’t possible, to try and seek out other types of monumental pieces to visit to give the child something to hold onto about his/her story.

What were some unexpected outcomes of the trip?

It turned out that the fact that Arri had learned about Ethiopian culture, and even knew some words in Amharic, was very affirming to the people that live in that country, which was something really unexpected for us. It seemed to help Ethiopians to see that US families that adopt Ethiopian children are trying to teach them who they are and are giving them a sense of their birth culture and history. This was evident even in just the ways people’s faces brightened when Arri said hello to them.

And how did the trip affect Arri?

We were really taken aback by how much confidence and peace the trip gave to our daughter. The way in which Arri was welcomed and affirmed by the Ethiopian community, was truly transformative for her.

I think that Arri also really grew in her understanding of her adoption. The experience with her birth mother, seeing the country, the hospital where she was born, all enabled her to really see that her adoption was not about anything that she did wrong, but due to circumstances.

It’s clear that you and your husband decided early on to raise your children with openness around their adoption. What prompted that decision?

Before adopting Arri, I attended an Adoptive Mom’s Retreat, which I now attend every year, and at those retreats, they talk so much about trying to instill the importance of being honest and raising your children to know who they are. At the retreat, adoptee young adults share their stories on how not knowing who they are, or their parents’ lack of openness around their adoption, led to a lot of grieving and pain for them.

I took from hearing those stories that the adoptee voice isn’t always lifted up as it should be, and it’s important to nurture children’s identity and be honest with them.

And I know that that’s easier said than done. Many families like ours commit to that idea of openness in the early stages, when you’re still going through the adoption process—and it’s one thing to say you’re going to do it and it’s another to really follow through, to discover how to do that, to equip yourself and your family to maintain that commitment and to face any fears about following through.

What are some resources that have helped you and your family to embrace openness in the ways you have?

We found a lot of community and support by attending different camps. I’m not really that much of a social media user, so for me, the face-to-face gatherings are what I look for to engage.

It’s just nice to have a safe place to go where everyone is walking the same walk, so to speak. And even if the topics are broader, like about being a transracial family, as opposed to something more country or region specific, it’s still very helpful.

Everybody needs community—both the children and parents.

Any plans to take your younger daughter, Etta, to her birth country?

We are absolutely planning to do a trip to South Africa for Etta once she’s old enough, but we are just beginning to discuss what that will look like, and are just starting to find ways to connect Etta to her story—mostly because South Africa is a very different country than Ethiopia, and up until now, a lot of our community connections are to Ethiopian culture. But Etta has really enjoyed learning about Ethiopian culture with her sister and has been warmly embraced by the local Ethiopian community. So, we expect it will be a harder road to navigate, but we are certainly up to the task!

Spence-Chapin provides emotional support for individuals and families preparing for a birthland trip. Contact our team at [email protected] or 646-539-2167 to schedule a coaching session today.