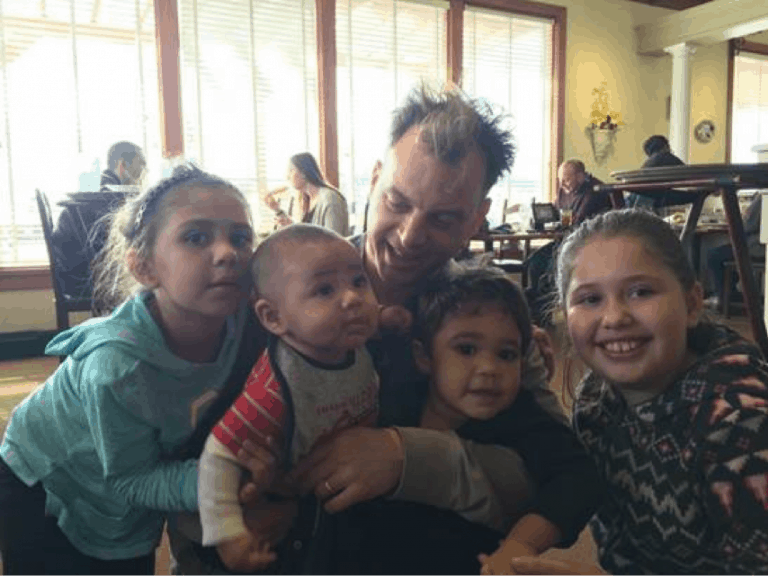 Dax (third from left) with three of his biological siblings and adoptive Dad, Jochen

For National Adoption Month, I’m excited to share my personal story of open adoption with you all. As an adoptive mom in an open adoption and as a social worker focused on Birth Parent outreach at Spence-Chapin, I have a unique perspective on adoption that I think is important to share. Adoption is such an integral part of my life and something for which I am so grateful and proud.

My husband and I adopted our son Daxton (Dax) in 2014. He’s now four years old! When we decided to adopt, we began working with an adoption attorney, and within six months of completing our home study, we had connected with Erin, Dax’s birth mom when she was about two months pregnant.

From that moment on, we truly never looked back. It seemed like things were destined to be as soon as we started talking to Erin. We drove Pennsylvania from NYC to meet Erin for the first time in January 2014. She even invited us to meet her and go with her to get her first ultrasound to find out the gender of the baby! What do you know, the day we started driving was the day Snowstorm Hercules pummeled the east coast! We had to pull over on the side of the road several times due to heavy snowfall, but we kept trudging along because we were so insistent that we were going to make it to this appointment, no matter what. And I’m so glad we did! I still have the ultrasound photo today saved!

I’m so thankful for having this chance to visit Erin while she was pregnant because it set the stage for a genuine and trusting relationship going forward. Throughout this journey of getting to know each other, Erin has been an open book. We could see right away that she had the best intentions and was an incredibly brave, honest, strong and trusting woman. She shared her story of why she was considering adoption with us and we could see firsthand what a kind and loving mother she was to her four other children. We could also see how hard it was to be a single mom raising children, while trying to work full-time and complete her education so she could make a better life for her family.

As Erin’s due date began to approach, she kept us involved every step of the way. She included us in her birth plan and introduced us to her other children and her best friend. She also allowed us to be by her side in the hospital when she gave birth! She was amazing at the hospital – she let me cut the umbilical cord and let us hold Daxton for skin to skin contact while she also bonded with him and breastfed him throughout the time we were in the hospital. We just followed her lead.

Daxton was born on May 6, 2014 and that weekend we celebrated my first Mother’s Day with Erin, Dax’s birth siblings and Erin’s best friend in Pennsylvania – as we were hanging out, barbecuing and watching Daxton sleeping happily in his car seat, I continued to be in awe of Erin’s grace and generosity in sharing this event with us.

Since Dax’s birth, Erin continues to show her kindness, resilience and strength in so many ways. And I often see these qualities in Daxton too, like the way he interacts with everyone he meets in such a friendly and confident way. From the moment he could smile and wave, he’s been making friends with almost everyone he meets.

We stay in touch with Erin in many ways – we keep each other updated on Facebook and Erin’s always one of the first to like any of the posts I have about Daxton or parenting. I know she’s always thinking of us and we’re always thinking of her as well. We also visit each other about once or twice a year. For Dax’s 4th birthday, she came to NYC with all the kids and baked three gorgeous cakes for our party. She always goes above and beyond our expectations during these visits.

Overall, I feel so lucky to have this relationship with Erin and am happy that Dax will grow up knowing his birth mother and his birth siblings and be able to answer all the questions he may have about his identity as he gets older.

Parenting may be one of the hardest jobs on earth, but for me being in an open adoption is one of the easiest things about being a parent. I know there are going to continue to be challenges, tough conversations, and ups and downs in the years to come, but I’m not worried about answering questions about adoption with Dax or anyone else. In that area, I know without a doubt, with Erin’s help, we have honesty, love and resiliency to guide us.