Highlights of the 2018 Gala: An Evening Celebrating Family 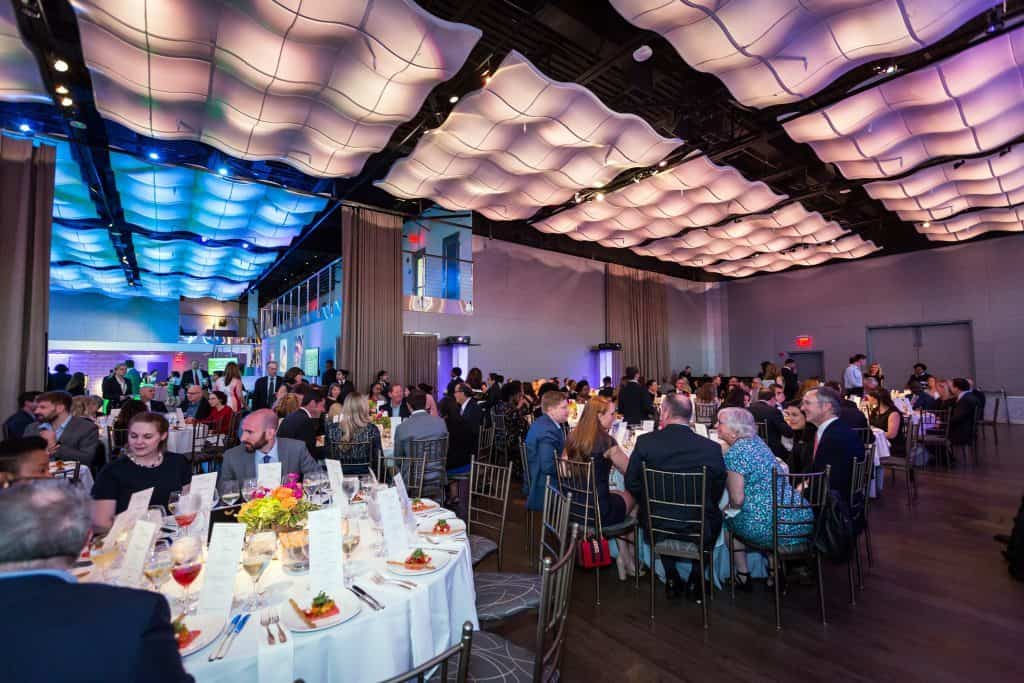 Spence-Chapin’s 2018 Gala on Thursday, May 3rd was themed, “Every child deserves a family”—a guiding principle of the organization over its 110-year history. And while the event truly reflected this concept, it presented it through the lens of creating family, highlighting the many varied and beautiful ways in which we all build family.

Hosted at the lovely Current at Chelsea Piers in New York City, the event featured a silent auction, cocktail hour and dinner overlooking the Hudson River. Returning for his second year to preside over the evening was NBC New York’s Storm Team 4 weatherman, David Price. Opening the program with some lively quips and wit, Price then introduced Spence-Chapin’s President & CEO, Adam Cotummacio, to set the tone of the evening.

Mr. Cotummacio spoke about the ways in which each family uniquely creates their own special environment—maybe through a set of household rules over chores or watching tv that may seem strange to the outsider, or through traditions that are set up and done every year without question—and in this way, begins to build family, that sense of belonging and safety.

Hardie Stevens then took the stage, an entrepreneur and adoptee through Spence-Chapin. Mr. Stevens spoke about the significance of adoption as a lifelong experience and the unique ways it has shaped his view of family.

Spence-Chapin then premiered its short film, “Family,” which chronicles how Spence-Chapin helps to form loving, nurturing and permanent families through its domestic, international and special needs adoption programs; its Granny and Interim Care Programs that provide ongoing care for infants and children; and its unbiased counseling for pregnant women and birth parents as they navigate different options available to them.

Featured prominently in the film is Spence-Chapin’s very own family member, Antoinette Cockerham—an employee with Spence-Chapin for 25 years and the recipient that evening of its Lifetime Achievement Award. Ms. Cockerham, or “Toni” as she is known among friends, served as Director of Domestic Programs at Spence and helped to create hundreds of families through adoption during her tenure

Spence-Chapin Board President, Ian Rowe, presented the award to Ms. Cockerham and said of few words about his and his wife’s own journey in an open adoption through Spence-Chapin, and the beautiful family that they have created. In her gracious acceptance remarks, Ms. Cockerham pointed to the many challenges that still lie ahead and the important work that Spence-Chapin must continue to do, and can accomplish, with support.

That support became palpable as Celebrity Auctioneer CK Swett took the stage and led a direct pledge moment that helped raise $80,000 for the organization’s programs in just a few minutes. It was a spectacular outpouring of support for the work that Spence-Chapin has done in its extended history and will do in the future.

Later that evening, Mr. Cotummacio reflected on the whole of the evening, and the integral role Spence-Chapin has been able to play in the lives of so many children and families:

“Spence-Chapin is truly a unique organization. This year’s Gala was dedicated to the work we have done serving as part of the connective tissue to thousands of families throughout our 110-year history. The event enabled us to celebrate family and open-adoption in all its intricate, loving, challenging and wonderful forms. I am forever grateful to our amazing staff and the impact they deliver each day the Spence-Chapin Way by helping to create strong families and by providing women in crisis with the support and counseling needed to make informed decisions about their options.”

Spence-Chapin is appreciative to its Gala Committee, Board of Directors, attendees and supporters for making this night successful and wonderful. Please make sure to view the photos of the event and the featured short film, “Family.”