Let Me Know My True Name 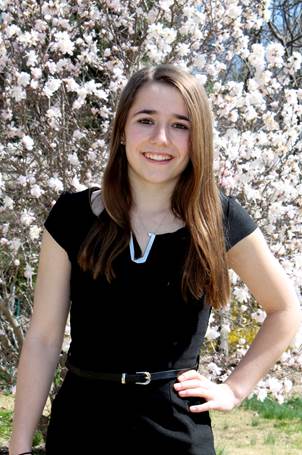 My name is Allie Herskovitz. I am a junior at Briarcliff High School in Briarcliff Manor, NY.  I am a varsity cheerleader, study dance, serve as a volunteer with Bridges to Community in Nicaragua, and am working on my Girl Scout Gold Award. I was adopted domestically at birth and since fourth grade I have participated in several Spence-Chapin groups.
This winter, as an English assignment, I was asked to write an editorial on any topic important to me. Just a month before I had traveled out West and met members of my birth family for the first time. I was fortunate because my mom had kept all the documents from my adoption. I was able to make the connection without much of a search. My experience was very positive in many ways; however, I had attended a Spence-Chapin reunion workshop in 2014 and knew it could be very different- and frustrating- for many adoptees. When my teacher assigned the editorial I had reunion issues on my mind, so I decided to research and write about adoptee access to U.S. birth records. What I learned has made me a strong advocate for full and open access-for every adoptee.

Imagine that you were denied access to all information about your birth. No original birth certificate. No names of your birthparents. You might not even know where or even when you were born. How might you feel? For adoptees born in forty- three U.S. states this is current law- we are denied access to our original birth records. We are banned by the state from knowing our true origins. This practice of “sealing” birth records for adoptions began in Minnesota with the intention to overcome attitudes about the shame of adoption and illegitimacy. Over time almost all U.S. states banned adoptee access. Attitudes in some states have changed in recent decades, but almost six million U.S. born adoptees are still denied their basic birth information. I am one of those adoptees and in 2015 I believe everyone deserves full access to their original birth records as a fundamental human right.

Many Western countries, including England, Scotland and Israel, allow open access. In the United States, adoption regulations are delegated to the states, not the federal government, and the majority of states have laws preventing direct adoptee access to original birth documents. Starting in the 1930s and 1940s, social workers and adoptive parents encouraged states to seal records when an adoption was finalized. By 1950, most states had regulations that forever barred adoptee access. Since then, only a few states have changed their laws. Currently just seven states have completely opened their records, while several others provide for unsealing with restrictions. For example, Maryland and Iowa only allow access through a “mutual consent registry” and Nebraska allows adoptive parents, as well as birth parents, to veto unsealing.

Researching the history of U.S. adoption, I learned that over the years adoptees have been denied their records for three main reasons. The first reason, strongly promoted by some prominent adoption lobbies, has been the protection of birth parent confidentiality. According to this argument, unsealing records now would betray a promise of anonymity made at the time of the adoption. However, in the only two legal cases that have ever ruled on this claim, the courts have said open records laws do not violate privacy rights. The second reason dates from decades past when adoption was viewed as a stigma and spoken only in whispers. During the Depression and after WWII, issuing “amended” birth certificates became routine and helped to reinforce a “culture of shame that stigmatized infertility, out-of-wedlock birth, and adoption”. A third rationale is a concern for “disruption,” that sharing original birth information would disturb the lives of the adoption triad-birthparents, adoptive parents, or the adoptee. While some adoptive parents may still favor closed records for this reason, recent surveys show they are now a small minority. The International Association of Adopted People does not support any form of closed adoption, and rather than viewing open access as a disruption, states that sealed records are “detrimental to the psychological well-being of the adopted child”.

Among the public, as well as different members of the adoption community, there is a growing consensus that adoptees deserve full access. My family and I strongly support this position. We reject the age old reasons for sealing birth records. We see no valid justification for the state to deny me my original birth documents. I should have the same rights under the law as anyone else born in the United States- the right to know who I am. I should be allowed unrestricted access to my original birth certificate so I may know critical legal, medical, and genealogical information. That knowledge is part of my true identity. One organization, Adoption Find, really speaks for me when they state, “Adoptees did not sign away their rights. Identity is a human right…Adoption is not magic. Babies do not disappear into a void, never to be heard from again. We are real living, breathing people who deserve the same history, and wholeness of being that every non-adoptee takes for granted”.

Anyone favoring open access has opportunities to change state laws. At the current time, several states including Pennsylvania, Arkansas and Connecticut, have legislation under consideration that would expand adoptee access to their birth records. Citizens of these states, as well as all individuals advocating open access, can write to their state representatives. They can also write letters to their local newspapers and make donations to organizations that encourage unsealed records, such as Spence-Chapin.

According to one advocacy website, thelostdaughters.com, “what is missing the most in adoption is the truth”. Like so many American adoptees, I am not allowed by state law to see my original birth certificate. I believe it is time to get past the old arguments and to unseal every U.S. birth record. Without a change in the law, I could spend a lifetime of longing and searching for my true identity.