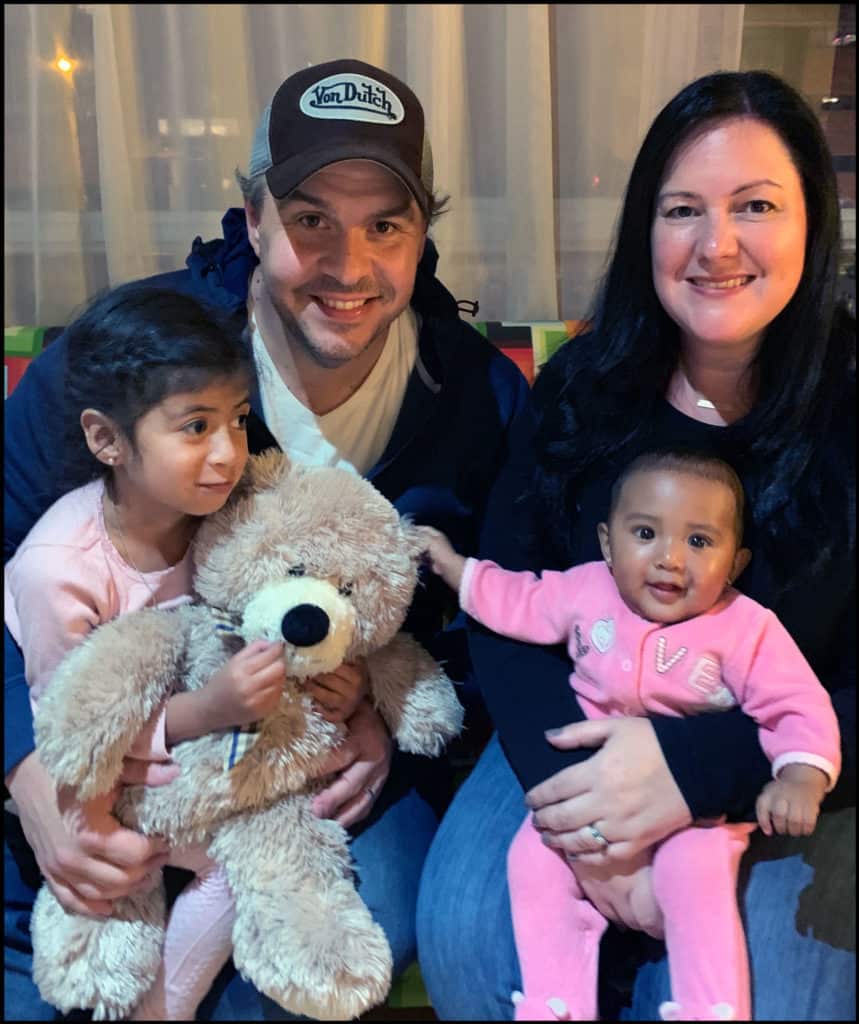 My wife and I decided to adopt in 2011. After weighing many options, including domestic adoption, we found the Colombian Heritage program at Spence-Chapin. My wife is half Colombian and half Portuguese and has always associated more with her Colombian culture and traditions.  In 2012 we submitted our application and started our training, home study, and dossier paperwork.  Our dossier was soon submitted to La Casa de la Madre y El Nino, one of the oldest orphanages in Colombia. We were matched with our daughter in July 2014 and traveled to meet her in September.

In Colombia, the day a family and child meet for the first time is known as “Encuentro.” Our “Encuentro” was September 11, 2014. I remember waking up excited – until I turned on the TV and saw the 9/11 footage being replayed.  It was a roller coaster of emotions as we heard the names of people who perished that tragic day, but we reminded ourselves that we were only a few hours away from what would be the happiest moment of our lives.

We arrived at La Casa that morning, and met our beautiful daughter, Genevieve.  She let out a huge smile as soon as my wife took her into her arms, and the happy tears began flowing. The first days a family spends with their new child is known as “Integracion” or, in English, the Integration Period. “Integracion” went very well, as did all the remaining appointments, and we returned home together on October 24th.

A couple of years later, 2016, we realized our family wasn’t quite complete. We started the process of adopting our second child. We decided to once again adopt from La Casa de la Madre y El Nino over the central authority (ICBF), despite potentially longer wait times, due to our connection with La Casa. It just felt right.

We moved from New Jersey to Maryland during this adoption, which added some time and additional paperwork, but we were matched with our second daughter in November 2018.

We didn’t travel until March 2019 due to more delays in the paperwork, but returned home exactly one month later, with our second daughter, Madeleine.  In case you’re wondering, the girls’ names bring along a little of my heritage (my mother is French).  This trip was extra special for us as we got to experience Genevieve becoming a big sister; she was the first to see Madeleine at La Casa, and even helped getting her dressed for her big day!

The process has been streamlined quite a bit in-country due to ICBF processing their cases through a court in La Mesa, rather than in Bogota. La Mesa is a beautiful city about 2 hours outside of Bogota, with a judge who is extremely supportive of adoptions. We stayed at the Kau Hotel, and highly recommend this hotel to families.

I also would guide prospective Colombian Heritage families to a private Facebook group (Colombia Adoptions) that is extremely helpful with any questions that will arise during this often-daunting process.  We found the group to be an invaluable asset.

There are times during the process when your patience will be tested, but I assure you there is a light at the end of that long tunnel. For us, that light has been seeing these two beautiful girls thrive in a loving home.