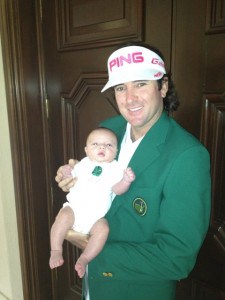 This year, a miracle happened at the Masters, both on and off the green. While self-taught superstar Bubba Watson made his game-clinching shot down in Augusta, his wife Angie and his newly adopted son Caleb watched from their house in Orlando. Just one week earlier, before Bubba donned his iconic green Masters jacket, they got the call that they had been waiting on for four years, they were finally going to be new parents. “It’ll probably be more emotional than this win, just to be there with my son and my wife.  I’ll get to raise an amazing kid.” Bubba remarks on going home to see his wife and 8-week old son.

The couple is elated to bring their newborn home, but it has been a long and storied road to Caleb’s arrival. After Angie and Bubba decided on a domestic adoption, they chose an agency, Chicks in Crisis, to help start the home study process while living in Florida. But, mid-way through, the couple made the decision to move to Arizona to be closer to family and their church. “When you move states it’s a totally different process, our home study got wiped away so we had to start over.” says Watson.

After their move, their plan to adopt was met with number of setbacks. As for many other families, life kept moving swiftly, bringing with it a number of unexpected ups and downs. In 2008, Watson’s father was diagnosed with throat cancer, and two years later he passed away in 2010, right after Bubba won his first Major championship. Around this time, Angie was misdiagnosed, and the family was scared that she was suffering from a cancerous tumor. The couple stuck together through their emotional turmoil, never giving up on their plan of completing their family.

Finally, in 2012 the Watson’s had a year of breakthroughs, despite a few bumps in the road. “We had two babies, two moms turned us down that went with other families, and then the Wednesday night right before Bay Hill is when we got the word that Monday we’d pick [Caleb] up.” Even through the craziness of his sudden celebrity and a Masters victory, Bubba is most excited and thankful for his new-found fatherhood, planning the very best he can for Baby Caleb. “As a father, you just want him to excel at something, and whatever that is, whatever their passion is, you just want to support them, be there for them, and hopefully they can grow up and be better than you one day at whatever it is.”