Obama’s for Same-Sex Marriage, but what’s next? 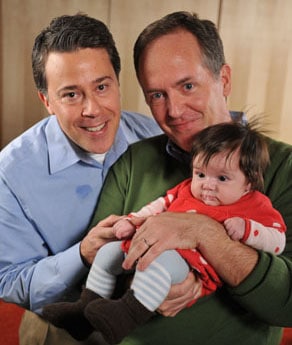 Almost two weeks ago, President Obama shared his firm position on Same-Sex Marriage in America. He’s for it.
A number of publications lauded his efforts to take a clear stance on the hot-button issue, but once his statement was made, many questions followed. How and when will the rest of country follow suit with the president’s perspective? What protections and rights will same-sex couples have as opposed to married couples?  Must we signify a difference between same-sex marriages and heterosexual ones?

Of course, at Spence-Chapin we’re wondering what this means for our LGBT couples who want to adopt children.

Less than a year ago, New York State passed the Marriage Equality Act to legalize same-sex marriages within the state. New Jersey has granted Civil Unions to same-sex couples since 2006, granting them the same legal rights as heterosexual married couples while still reserving title of “marriage.”  As the way of LGBT Marriage, the tolerance of LGBT adoption is also considered a State’s right, allowing any state in the union the power to ban LGBT couples from adopting.

Thankfully, New York and New Jersey are not among those states against LGBT adoption, and, in fact, both states make it explicitly legal in their constitutions. (States that ban LGBT adoption: Utah, Alabama, Michigan, Wisconsin, and Ohio) However, there are still children around the nation, and the globe, who cannot be adopted by loving parents simply because of sexual orientation.

In 2007 the Williams Institute reported that only 65,000 children have been adopted by same-sex couples, yet an Urban Institute report claims that almost 2 million LGBT couples are interested in adopting. 2 million couples! Imagine all of the loving homes that could be provided for children in need.

Yet, that isn’t the reality, and prejudices that keep capable, loving couples from adopting still exist. But here’s the truth of the matter: after factoring in data on education, employment, home-ownership, and residential stability from the 2000 census, federal reporters concluded “same-sex couples present many of the positive qualities that would create a suitable home for children in need of being adopted. …review of past research finds no notable differences between children in heterosexual parent households and those in lesbian and gay parent households.” Clearly, many couples have the desire and the capability to properly care for children who need them; yet restrictive laws still remain for the sake of state’s rights and intolerance.

Over America’s 235-year history, we’ve battled different forms of discrimination many times in many different ways. However, one thing has remained the same; we’ve always come out the better for it. Americans ended slavery, gained women’s suffrage, protected laborers, legalized interracial marriages, and so much more. Why would we ever want to step backwards?

So what do you think? Do LGBT couples need federal protections? Was Obama’s statement effective? What’s next for LGBT families?