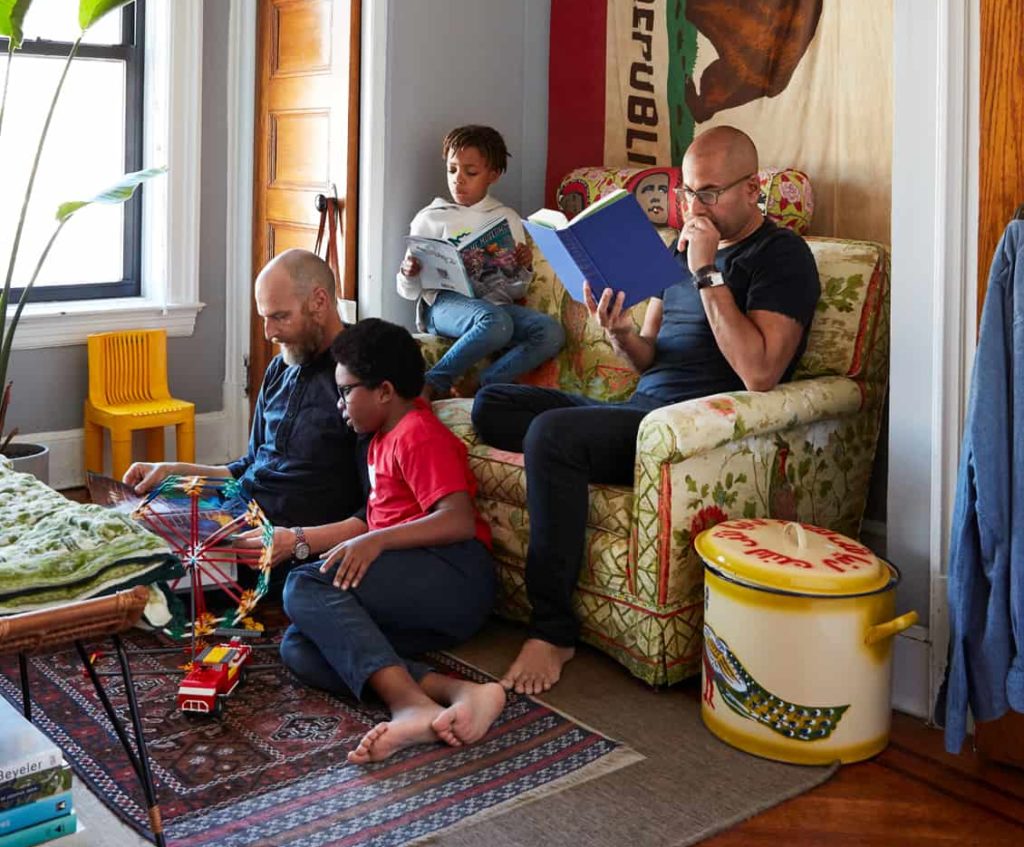 In this new segment, Spence Families at Home, we bring you the stories of Spence-Chapin families as they navigate the COVID-19 crisis.  If you would like to share your family’s story, please contact us at [email protected]

Rumaan Alam shared his experiences at home with his husband, David Land, and their sons Simon and Xavier.

Describe who is in your family.

My husband and I and our two boys. Simon is 10 and Xavier is 7.  Simon and Xavier were adopted domestically as infants.  It’s just the four of us living here in central Brooklyn.

What’s been the best surprise about spending so much time together as a family?

I think we’ve all tried to look for the silver lining. It’s brought out our inner optimism which has been nice, and helpful because we’re in this together. You have to approach a big problem with that spirit.  But it’s got its challenges.  They are little kids. There’s a lot that they don’t understand.  And whatever anxiety adults are feeling right now, kids are perceptive enough to internalize it, so that affects things. They miss their friends and their routines so it’s not easy, but I do think we have all tried to rise to the occasion in our own ways.

What’s been the biggest challenge?

The challenge is just the logistics and the enforced family time. We’ve tried to remember how fortunate we are, and that is another thing that has been revealed—our own understanding of our own privilege and our own good luck. Obviously, it’s a challenge to miss school and to have to negotiate working while simultaneously educating your kids or just being with them. But it could be much worse. It’s been helpful to remember how lucky we are and as tough as it is right now to get a good day’s work in and feel like the kids have learned anything, those are pretty good problems to have in the big scheme of things.

But kids require interaction and social stimulus and the magic of school is not just in the education, it’s in their ability to be independent of us for a little bit during the day and it makes them happy in ways that they can’t articulate. Kids are always saying “Oh I hate school” but actually they love it because they get to be with their friends. It’s been hard to have to deny them that. And it makes them feel sour in a way I can see and I feel bad. The only thing that would make them feel better is to run outside with their buddies and that is something I cannot provide for them. And that sucks.  It sucks to know your kid needs some very specific thing you simply cannot give them.

David and I are both self-employed people and so there’s uncertainty in our work lives as there is for so many people. It’s hard to deal with our anxiety around that when our hands are full feeding everybody and making sure the kids are brushing their teeth and doing all that stuff. Parents need downtime just like anybody else. They need the ability to say, “I’m not a parent right now. I’m just a guy who is going to the gym or for a walk to the bookstore by myself.” It’s only been a couple of weeks, but it’s been hard to say “I’m going to go upstairs right now and no one can bother me.” That’s the lowest priority in any household right now. But that’s important. It’s important to feel like yourself and feel like a human being.

What’s the funniest thing your boys did or said this week?

They have both asked a number of times what day it is.  I think it’s really funny. It reveals they are creatures of habit.  When I take them to school on the subway on Friday mornings we have a celebration called Donut Friday. I take them to Dunkin Donuts and that’s how they mark the days.  Or they mark the days if they have art or another class. So it’s funny to see them adrift about the days.  We’ve been allowing them to watch PBS kids on the weekday mornings, which is not something that we typically do.  And David and I are constantly around which is unusual. So you can understand why it’s hard for them to distinguish between days. It’s just funny to hear them ask, “What day is today? What day is tomorrow?”

Simon is in fifth grade and part of his teacher’s curriculum is to watch CNN 10. It’s a wonderful resource for middle school kids, but it’s very forthright and it talks about the news. So it’s been interesting to watch him think through the world.  None of us understand what’s happening so whether you’re in fifth grade or whether you’re 50 years old, you’re thinking through the same things. I see him differently. He’s still a little baby but he’s got this brain that’s working and it’s amazing to see his brain tackling the same thing that my brain is tackling.

What’s your favorite spot to spend time alone in your house and how long do you typically get away with it?

I do most of the cooking. I find it soothing. I can listen to a podcast and cook dinner and keep an eye on the kids or be allowed to zone out alone in the kitchen because I’m working. It’s a kind of a weird, guilt free escape.

When you aren’t busy taking care of everyone else, what are you doing to take care of yourself?

That’s something both David and I need to prioritize. I’ve been busy at work and it’s a challenge to put relaxation first.  As we’re taking a long view and we realize this is going to go on for some time, I’d like to institute something regular. An adult time-out.  So Papa has a time-out and he gets to go away for ninety minutes and do whatever it is that he wants to do and no one can bother him and he doesn’t have to be folding laundry, he can just be off. Being alone with a book is just as valid as getting laundry done because I want to keep my spirits up.

What’s a piece of advice you have for other Spence families who are maybe going a little stir crazy at home?

You have to adjust expectations and lower your standards a little bit. If everyone has cheese and crackers for dinner, life will go on. If you don’t put the Legos back in the bin one night, it’s not the worst thing that’s going to happen.  If you let your kids watch a half hour more of television so you can do nothing for 20 minutes, that’s fine. They’ll be fine.  I think turning the pressure down on yourself will really help.