Father Shares, and Looks Up to, Son’s Love of Hockey 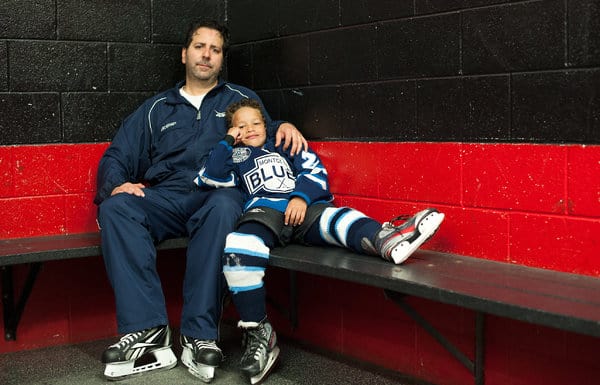 I had wanted to play hockey since I was 14 and saw Guy Lafleur score a hat trick at the Forum while I was visiting relatives in Montreal. But I lived in Florida. The best I could do was fool around with a hockey stick and a tennis ball as I roller-skated up and down our suburban cul-de-sac near St. Petersburg, with a taped rectangle against the garage door as my net.

More than 30 years later, my 7-year-old son, Sam, has the hockey bug. Sam, whom my wife and I adopted as an infant, has a wiry, muscular frame, and he cuts through the ice with grace and confidence. In three years, he went from a tumbling beginner to a confident boy who can execute crossovers skating backward.

When we first went to hockey practice, Sam would fall to the ice or slide into the boards. But he would get up, rub a sore arm or leg for a moment, then adjust his equipment and continue.

Sam was determined to skate better — a drive I never had in team sports. He was also a risk taker, unafraid to jump in and chase the puck with the older, bigger players.

Good-looking and physically at ease, Sam is the cool kid in school. I was a geek at his age; tall and lanky, I removed myself from the possibility of being hurt.

Before my wife, Martha, and I adopted Sam, we had come to accept that we were not going to be genetically connected to him. We would not pass along Martha’s musical ear, for example. But we also would not be passing along her “bad” genes; she had been treated for breast cancer several years earlier.

And, like all parents, we wondered how his personality would develop. Would he be studious, as Martha and I were? Would he be self-reflective and academically curious? Would he share our love of reading?

“Your kid is going to be a hockey player,” one of his coaches once told me. “He’s fearless, he’s quick — and he can take pain.”As it turns out, Sam approaches reading and spelling as a form of competition — just as he likes to be the first one on and off the ice with every shift change during his hockey games.

Although concerned about Sam’s safety, I hoped to spare him the quiet existence I had at his age. But he had inherited neither my reticence nor my childhood.

Watching Sam revived my teenage yearning to play hockey. And so, at 44, with his hearty endorsement, I enrolled in my first clinic. At 10 p.m. one Thursday in February 2011, I walked into the locker room, dank with sweat, at Floyd Hall Arena in Little Falls, N.J. Twenty other men were there. I found an empty spot on the bench, pulled my new equipment out of my bag and ripped off the sales tags as I strapped each piece of armor to my body. “You may want to put your shin guards and socks on before your pants,” said the muscular, unshaven player sitting next to me.

Out on the ice, shaky on my feet, I sent wild passes. The other players exchanged annoyed glances. Forty-five minutes later I was winded, my legs numb. Then the coach put us on teams for a scrimmage. All the memories of my dreadful middle school years rushed back. “I’ll take Rotella if you take Cindy” was a phrase I recalled when other youngsters were picking teams.

A few minutes into my first scrimmage, I received a pass directly in front of the net. My stick, along with the puck, caught in my skates, and I took a spill in front of the goalie. Mortified, I skated to the bench for a line change.

Two minutes later, I had caught my breath and was eager to get back out there. This time I skated down to our net just in time to stop a player from scoring.

Back in the locker room, I thought I would pass out from exhaustion and exhilaration. I felt totally connected to my French Canadian heritage — and to my son.

Now that Sam plays travel hockey, he is on the ice four or five days a week. He is part of a fraternity of youngsters who get up at 5 a.m. on weekends to play a game for an hour. He is firmly, and comfortably, in his milieu.

And once or twice a week, I find common ground with many of the hockey dads and fellow players in clinics and on my team, the Rebels. When we were young, they would have scoffed at having me on the ice. Some of them probably still do.

But no matter. There is nothing like passing the puck to a teammate who one-times it into the goal — especially during a late-night game at an outdoor rink in the dead of winter. I would never have been able to do that in Florida.

Recently a hockey friend encouraged me to play at an advanced level with men our age as well as some college students.

The game was faster and more physical than I had ever played. We rotated our lines, and during my second time on the ice, the puck ricocheted off our goalie toward me on the right wing. I raced to the puck and turned for a breakaway to the opponent’s net.

I was tripped by a defender and fell hard, landing on my chest. I rubbed my aching ribs and thought of Sam. But I could move and breathe, so my ribs were most likely not broken.

I got back on my skates and continued to play the rest of the hour and a half. The fear of continued injury had abated with the excitement of the game.

Then, when I skated back to the bench for the next line change, something occurred to me. Sam will never be a little version of me. While learning to play a sport that he loves, I can only hope to become a bigger version of him.