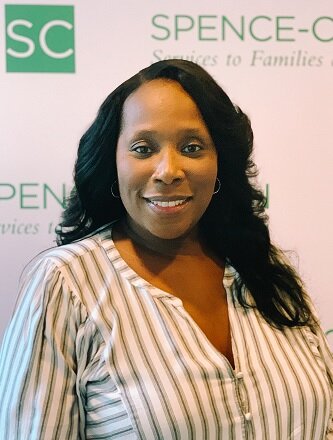 Doreen Jones became a mentor in 2012. She believes that that there is an entire world out there filled with opportunities and that we can all achieve our dreams if we believe in ourselves. Learn more about Doreen’s experience as an adoptee and a Mentor.

I was born and raised in New York City. I am one of seven siblings, four older brothers, one older sister (all biological children of my parents). Then there is myself and my younger sister, both of us welcomed into the home via Spence-Chapin.

How did your family share your adoption story with you?

I remember being 12 or 13 years old when my mother sat me down at the kitchen table and first explained to me what “being Adopted” meant. Looking back, I feel my mother may have been fearful of how I would handle this information. Back then African-American children were placed with African- American families so I had no idea I wasn’t their biological daughter. I was told that I initially had trouble understanding my identity, so my parents reached out to Spence-Chapin for help. I remember getting picked up in a big, black car (at least it seemed big to me at that age) and making the trip into New York City to Spence-Chapin to speak with a Psychologist once a week. Eventually all my questions and fears subsided, and my life went on.

What myths or misconceptions did you encounter as an adoptee?

Up until the past 6 or 7 years I never talked about being adopted. Not that I was ever embarrassed, it just never came up. I’m guessing that was because no one else around me was adopted. Once I did start to share, the comments were surprising. I think the biggest misconception is that we’re not like everyone else. Some people were actually surprised that I’m adopted. Clearly, they expect adoptees to look, act or appear different. Hopefully, in that moment, they learned something.

When did you get connected to Spence-Chapin’s Mentorship Program?

Six or seven years ago I was looking to get involved in some type of charity work but was struggling to find something I felt passionate about. I had previously contacted Spence-Chapin because I wanted to know more about my birth family. After receiving that information, I started to receive the newsletter which included events at Spence-Chapin. The newsletter mentioned the Mentoring program and stated they were looking for Volunteers. I have always encouraged the youth around me to strive for success no matter what their circumstances are, so I was automatically interested and reached out.

What has been your experience as a Mentor?

Being a mentor has been great! My original intention was to help the kids, especially since I also struggled with my own identity as a child, but I must say the kids in the program have helped me in so many ways. This being my first interaction with other adoptees, I didn’t realize I’d be listening to so many different stories, each one very unique. Also, meeting other Mentors, some from different cultural backgrounds, is so rewarding. I have formed friendships and built memories outside of the program with a very special group of people. I don’t believe I would have made these connections if I had not become a Mentor.

What advice do you share with young adoptees in the Mentorship Program?

You are special! Someone cared enough about you to welcome you into their lives to give you the best life. Appreciate that. But not every day is going to be a good day. Sometimes you will be sad, sometimes you will be angry, sometimes you will be confused. And It’s ok. Being adopted is confusing sometimes but it’s not a curse. You are here for a reason. If you have questions ask someone, if you’re feeling sad or angry, talk to someone. These feelings will not last forever but don’t do it alone, we’re here to help you.

Spence-Chapin’s Adoption Mentorship Program is for adopted middle and high school students. Our program empowers adoptees through friendship, building self-confidence and challenging them to discover and understand their adoption identities and experiences. To learn more about joining the Program as a Mentee or Mentor, contact us at [email protected] or sign up for our FREE Mentorship Webinar!